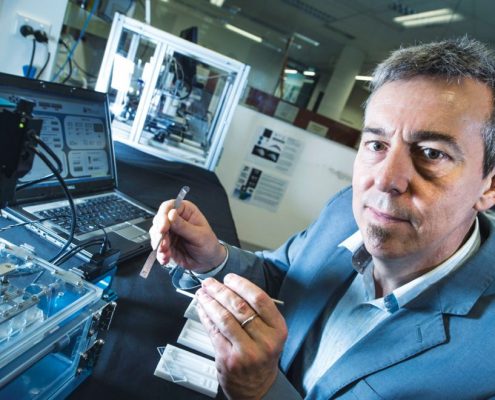 The European Society of Biomaterials has awarded its highest honour to QUT’s Professor Dietmar W. Hutmacher who is Professor and Chair of Regenerative Medicine at the QUT Institute of Health and Biomedical Innovation (IHBI).

Professor Hutmacher’s work has been acknowledged with the Society’s International Award which is bestowed on scientists who have been internationally recognized, have a high scientific profile and have made major contributions to the field of biomaterials.

Professor Hutmacher is  director  of the Centre in Regenerative Medicine at the ARC Training Centre in Additive Biomanufacturing where, as at IHBI, he has built a multidisciplinary research team including engineers, cell biologists, polymer chemists, clinicians, and veterinary surgeons.

His ability to transcend traditional disciplinary boundaries and initiate and nurture research and develop international educational programs across different disciplines has brought Professor Hutmacher a worldwide reputation as a pioneer in the field of biomaterials and tissue engineering regenerative medicine.

Professor Hutmacher’s thorough understanding of the status of the biomedical engineering field, and clear vision of the needs for the 21st century for this exciting and rapidly evolving multidisciplinary research field has seen traditional scientific/academic outputs as well as pivotal commercialization outcomes.

He has published more than 300 journal articles, edited 14 books, 40 book chapters and more than 500 conference abstracts. His body of research has had more than 20,000 citations, has an h-index of 68 and 10 patents and four spin-off companies.

Originally trained as an engineer, Professor Hutmacher is one of the few academics in the field of biomaterials/tissue engineering to have taken a research program from fundamental research through to clinical application utilizing research in-vitro, in-vivo, preclinical models and clinical trials.

The achievement of this prestigious award is particularly pleasing as Professor Hutmacher began his academic career only 20 years ago. He will receive the award in Athens in September.

Queensland University of Technology and Spanish Research Council to use Aether...
Scroll to top